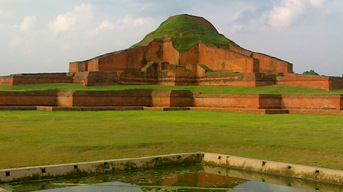 Traveler welcome to Rajshahi Tour : Trip to The famous of archaeological site in Bangladesh. It represents the earliest and the largest archaeological site in Bangladesh, consists of the ruins of the ancient city of Pundranagara. The site is 13 km north of Bogra town on the Dhaka-Rangpur highway. The ruins measuring 1500m N-S and 1400m E-W and are enclosed on their four sides by rampart walls that rise to an average height of 6m from river level. Many isolated mounds occur at various places outside the city within a radius of 8 km on the north, south and west, testifying to the existence of suburbs of the ancient provincial capital. After a series of excavations, Bairagir Bhita, Govinda Bhita, Parasuram Palace, Khodar Pathar Bhita, Man Kalir Kunda etc. were excavated.

Govinda Bhita a high mound traditionally ascribed to be the site of a Govinda temple and is located outside the northern rampart of Mahasthangarh (Pundranagar) of Bogra district. On its eastern and northern sides flows the moribund Karatoya. During the excavation in 1928-29, two temple remains were exposed: one western and the other eastern. These belong to different periods and are enclosed within a 6-0 thick perimeter wall. The western temple, erected probably in the 6th century, is larger than the eastern smaller one, built about 11th century, partly on the ruins of the western temple. The western temple seems to have been built on a high central shaft, solidly filled with earth, and surrounded by three graded terraces, each buttressed by a series of blind cells packed with infilling of earth, intended to strengthen the foundation of a massive superstructure. Approach to this cellular podium was from the west. 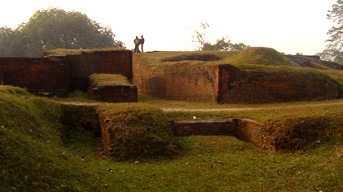 Gokul Medh is located around 5 km south west of the complex of the village Gokul. This site popularly known as Behular Bashar Ghar or Lokshminderer Medh is a 13m high podium consisting of 172 blind cells. On the flat top of this podium a Buddhist religious stupa or temple was built in 6th century AD. During the rule of Senas in 11th centuries another temple was built on the ruins of the former Buddhist one. The substructure appears to have been decorated with ornamental bricks containing floral and geometrical motif of ornamentation. 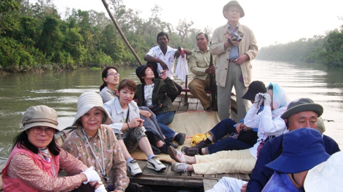 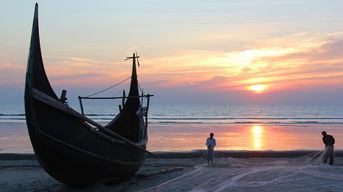 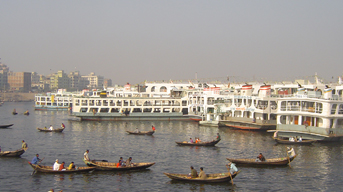 Due to its geographical situation the entire region of Bengal, including the Paharpur Buddhist Vihara has been one of the vital links between India and Southeast Asia since ancient times. The Sompur Vihara is a Buddhist Monastery dating from the late 8th century. It is located in Paharpur, in the northwest of Bangladesh. It is said to be the second largest single Buddhist monastery south of the Himalayas. It was made a WHS as a tribute to the Pala dynasty that ruled Bengal and Bihar for 3.5 centuries from middle of the 8th century. The monastery is built under the second Pala King Dharmapala as a quadrangle, measuring 281 meter on each side. All outer four wings contain monastic cells, 177 in total. In the center of the vast open courtyard of the monastery stands the shrine. Its remains are still 21 meter high and have three gradually diminishing terraces. The walls were built of burnt bricks; some ornamented with motif of flowers and seated Buddhaâ€™s. There were also bands of terracotta plaques in rows all around the terraces. From the 12th century on, after numerous attacks by invaders, the monks left and the monastery building suffered decline and disintegration. Paharpur Buddhist Vihara was included in the World Heritage List in 1985.

This stone mosque is situated in the village Kusumba in the district of Naogaon. According to an inscription, it was erected by a patron, Sulayman in 1558 during the reign of Ghiyath al din Bahadur Shah. The Kusumba mosque is one such example in Bengal, which may be termed as Black Gem of Bengal. Stones used in this mosque are dark black-basalt that was transported from Rajmahal hill of Bihar through waterways. It is located on the west bank of a big tank measuring 381m x 274 m. There is a big courtyard in front of the mosque surrounded by a low boundary wall. This mosque is still in a good state as it has been well preserved.

Varendra Museum was the first museum to be established in erstwhile East Bengal in 1910. The museum started out as the collection for Varendra Anushandhan Samiti or Varendra Investigation Society and got its current name in 1919. The Zamindars of Rajshahi and Natore, notably Kumar Sharat Kumar Ray, donated their personal collections to Varendra Museum. Varendra refers to an ancient janapada roughly corresponding to northern Bangladesh. This museum has a rich collection of objects of Mohenjodaro and also of 16th to l9th century AD. This is devoted to the study of ancient history and culture. Its rich collections contain interesting objects of past Hindu, Buddhist and Muslim heritage. It is located at the heart of Rajshahi town and maintained by Rajshahi University authority. The year of its formal establishment is 1910.

Putia is an upazila in Rajshahi district. Putia zamindari created by the Mughals in the early 17th century is one of the oldest estates of Bengal. The extensive area of the estate, enclosed within a moat, has a number of elegant temples embellished with terracotta sculpture, e.g. the Pancharatna GovindaTemple, a beautiful little do-chala shrine behind the palace, the hut-shaped Jagaddhatri Temple on the west and the large Shiva Temple at the entrance of the estate.

It was erected between 1823 and 1895 by one of the Maharanis of the Putia Estate in Rajshahi District. It raises two storeys on a 47'-6' square structure having a crown of a set of ornamental miniature towers, four on each corner of the storey and a central one crowning the top of the second.

The ShivaTemple, a 19.81m square building, was erected by Rani Bhuvan Mohini Devi in 1823 AD on a high plinth and plastered all over. It is decorated with numerous miniature ratnas on the main tower and on the four smaller towers on the roof of the ground

The two-storied Putia Rajbari, which is the most notable structure in the area faces a four-storied large pyramidal dol mancha on the north, across an open ground and presents an imposing 60.96m frontage. It has two symmetrical projected wings at the east and west ends while its central part, about 15.24m wide, accommodates a grand portal. This grand palace was constructed by Rani Hemanta Kumari Devi in 1895 AD in honor of her mother-in-law Maharani Sarat Sundari Devi.

Bagha Mosque was built in 1523 A.D. by Sultan Nusrat Shah, son of Hussain Shah. It is a richly decorated monument originally roofed over with 10 domes which collapsed long ago but recently rebuilt carefully to their original form. The superb terracotta decoration on the central mihrab represents floral frame work and jali rosettes. The whole outer surface of the mosque is beautifully embellished with fine terracotta art motifs.

Natore Rajbari is situated in Natore, a district town about 48 km east of Rajshahi, was the zamindari headquarters of the Natore Raj. Like most of the feudal palaces in Bangladesh the palace ruins of Natore are approached through a long avenue, fringed on either side with carefully planted rows of bottle palms. Ramjivan, the real founder of the Raj family, made his headquarters at Natore and built most of the Rajbari complex, the tanks, temples, orchards and flower gardens. Originally Natore was a small settlement under Taraf Kanaikhali in Lashkarpur Pargana.

Chhoto Sona Masjid is a remarkably fine architectural specimen of the Sultante Period. It was built by Wali Muhammad son of Ali during the reign of Sultan Hossain Shah (1493-1519). It has fifteen gilded domes including three chauchala domes in the middle row. Chief attractions of the Mosque are its intricate stone carvings and decoration. The gilding employed in the ornamentation that has given the building its appellation Chhoto Sona Masjid (Little Golden Mosque)

Literally Tahkhana (Persian) means a cold building or palace. A structure built on the west bank of a large tank situated in the Firuzpur quarters of the city of Gaur-Lakhnauti is traditionally known as the Tahkhana. Mughal Subahdar Shah Shuja(1639- 1660 AD) occasionally used to visit and stay in Gaur-Lakhnauti to honour his patron saint Shah Niamatullah Wali point to this great Mughal governor as the builder. Shah Shuja held his court at Rajmahal, not very far from Gaur. It is very likely that Shah Shuja built this small palace as a khanqah (resting, meditating and preaching place) of the saint, and the mosque and the tombs as its adjuncts.

Darasbari Mosqueis the largest mosque in the Bangladesh part of Gaur-Lakhnauti, now in ruins. It is situated in the Darasbari quarter of the mediaeval city on the west side of the Chhota Sona-Kotwali Darwaza Road, at present a desolated area near the Indian border. The name Darasbari is derived from its being located within a darsbari (place of lesson or learning), pointing to the madrasa to the east of the mosque, separated by a large tank, forming a typical Muslim educational complex. According to its inscription, which is now preserved in the Indian Museum at Calcutta, the mosque was built in 1479 AD by Shamsuddin Abul Muzaffar Yusuf Shah.

Kantanagar Temple is an eighteenth century brick temple, situated about 18 km. north of Dinajpur town. It has gained eminence as an outstanding monument in Bengal for its fabulous terracotta embellishment. This nava-ratnaHindu temple, exhibits the exuberance of Terracotta Art at its best in Bangladesh. Maharaja Prannath of Dinajpur began its construction about 1722. It was completed by his adopted son Maharaja Ramnath, in Shaka era 1674 (1752 AD. This magnificent pyramidal temple rose in three receding terraces and was crowned with nine ornamental spires or ratnas (jewels) on the corner of the three terraces which imparted to it an appearance of a huge rathaor an ornate chariot resting on a high plinth. It was provided with arched openings on all four sides in order to enable devotees to see the deity enshrined inside from all directions.

Dinajpur Rajbari now in ruins, is situated on the north-east outskirts of the present town. Originally enclosed within defensive moats and high rampart, the derelict remains of the Dinajpur Rajbari, can now be approached through a tall arched gate facing west. Inside the palace precinct near the gateway on left is a painted Krishna temple and on right, some ruined outhouses and another inner gateway that provides access to an inner square court. Facing the courtyard on the east is a flat-roofed temple, the front verandah of which is supported on four semi-Corinthian pillars and another set of columns carry the roof of the main hall.